Why Spain has a 27% unemployment rate

"The most dangerous, riskiest, stupidest thing you can do in Spain is hiring somebody."
Publicado por Faisotes en 13:43 1 comentario:

Really disappointing. I was expecting to see tough guys who lived without anything, made their own food and were completely self-sufficient. However, the spanish (and partially german) version of the ratlife is something that goes like this: "I live without anything and I am completely free... well there are some minor issues... Ok, I still need the state (or some other entity) to provide for me."

- A guy who claims to live without anything in a mountain. Later we find out he has a state pension and goes to the nearest village to buy food and other things such as tobacco.

- A couple that simply goes to live in a remote village with 50 inhabitants. As if that were something that nobody did before. They still have to work and buy things.

- A group of people that live in another remote village and plant their own food. However, they use tractors, have electricity, and have even an internet business!

- A german woman that barters with anything she has. She lives however in a nice flat with every modern comfort. She claims not to use money at all, but how is she paying taxes?

- A family that goes to live in a boat and travel around the world. Even though these seem to be the most consequent, at the end we find out they gave up and came back to live in Spain.
Publicado por Faisotes en 11:04 No hay comentarios:

This guy is awesome. He simply doesn't care about the future. Maybe he realized the system is deeply corrupt and he doesn't want to be part of it by having a job and paying taxes, or maybe he wants to have enough free time to think clearly and be creative. Whatever the reason, he is an example to follow. Seriously, if a lot of people did the same thing, many problems would disappear.

"My job is to make sure the sun is up and the girls are out." Awesome. 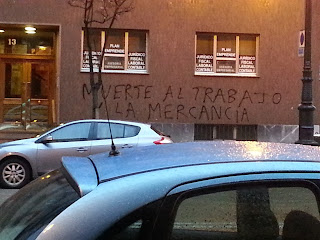 This is kinda weird but I have also seen this video today. The important thing about it is not that the girl is hot but her behavior and attitude, so cute and feminine. Compare her expression with the typical European or American girl expression, who looks at you as if she were a superior being. That's because women used to behave in such a way (what is called femininity) that inspired very good feelings in us men. But current women have lost that completely. That's the reason this video inspires such good feelings. You should watch more videos like this and less porn. And one day you will start seeing the matrix.